Spend some time exploring Lewisburg, and you'll see why this surprisingly cosmopolitan town of 4,000 garners so many accolades. Whether it's "America's Coolest Small Town" (Frommer's Budget Travel Magazine), or one of "The 100 Best Small Arts Towns in America" (Americans for the Arts), Lewisburg often appears on must-see lists around the country.

There's always something going on in this active community. Whether you want to dive head first into Lewisburg with a concert, play or festival, or just poke around the antique stores, boutiques and watering holes, you'll find the town charming and the locals welcoming.

If you're looking for an interesting time to visit, plan your stay with one of the annual festivals or events that take place throughout the year.

In the spring, the Lewisburg Chocolate Festival draws thousands to town to sample chocolate temptations of every kind. August features the Lewisburg Literary Festival, with the chance to meet bestselling authors like Homer Hickam (Rocket Boys), Jeannette Walls (The Glass Castle) and Kathryn Stockett (The Help).

Fall brings Taste of Our Towns, Lewisburg's largest outdoor event, where you can literally eat your way up and down Washington Street and listen to live music all along the way. If the winter blues get you down, come out for the West Virginia Winter Music Festival. One price gets you into seven venues, where more than 40 musicians and bands are on the docket.

When the sun goes down, downtown Lewisburg lights up. Stroll along historic streets pulsing with life, scents, and sound. Lewisburg's charm by day gives way to a certain mystique at night that beckons you to come out early and stay out late.

“ If you're looking for an interesting time to visit, plan your stay with one of the annual festivals or events that take place throughout the year. ” 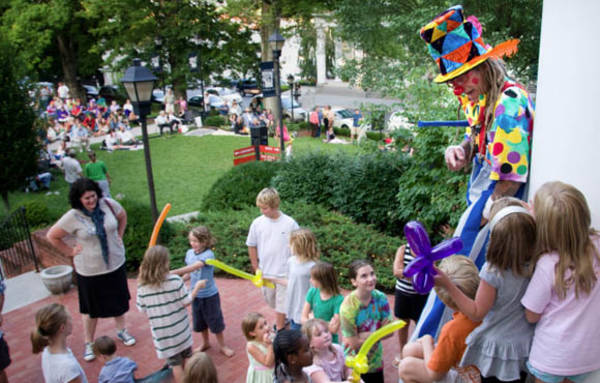 The Lewis Theatre
Opening its doors in 1939, it was once Lewisburg's only movie house. The theatre continues to show films (often ones that rarely make their way to small towns) and hosts dance performances, concerts and other events, many directed by the Trillium Performing Arts Collective.

Greenbrier Valley Theatre
As the State Professional Theatre of West Virginia, GVT has been producing live theatre for nearly 50 years. It uses members of the Actors Equity, bringing exceptional quality to their productions, ranging from Shakespeare to Broadway musicals. The theatre also serves as home base for the West Virginia Jazz Orchestra, a big band comprised of talented area musicians.

Carnegie Hall
Built a century ago with the assistance of philanthropist Andrew Carnegie, the hall features concerts by well-known touring artists. On summer evenings, you can bring a picnic and catch an Ivy Terrace concert on the front lawn of this stately building. You're likely to hear anything from bluegrass to classical music, and it's free!

Bars & Pubs
If you're looking for a place to kick back and enjoy an evening bar-side, Lewisburg has a variety of appealing watering holes, ranging from upscale lounges to an authentic Irish pub. Each with its own unique character, you'll find the atmosphere friendly and relaxed.

And if you want a taste of the local sauce, be sure to ask for the bartender's special using spirits by Smooth Ambler, or perhaps a cold brew from Greenbrier Valley Brewing Company or crisp hard cider straight off the Hawk Knob Farm.

And if you happen to be around on the first Friday of any month, downtown Lewisburg hosts First Fridays After Five from 5-9pm. Stores stay open late, with many serving wine and nibbles and featuring other entertainment.