Before opening the doors four years ago, Nancy Stewart, The Livery’s day-to-day manager, nightly host and creative muse, admits her sum total in food service amounted to family dinners and a short stint in waitressing. 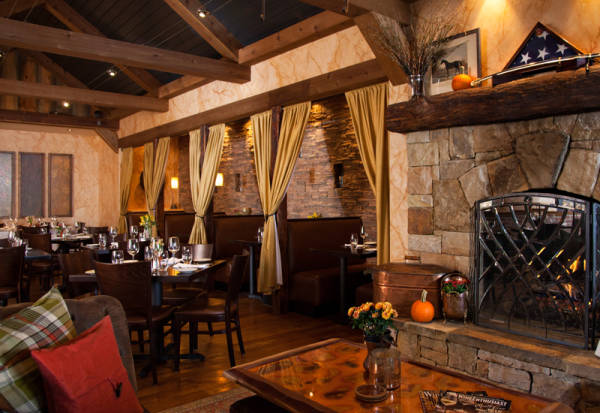 For about as long as she can remember, though, it was a dream of her and her siblings to run a restaurant. It wasn’t until her brother, John, the financier of the project, began exploring the Appalachian Mountains and its scenic back roads that things started to happen. One thing led to another -- the purchase of a farm and family vacations in the region – they discovered Lewisburg, the perfect location for their new enterprise.

y claims she is better at ideas than following through on details. Of course, you wouldn’t know it by stepping through The Livery’s front doors.

Located on the east end of Washington Street, The Livery Tavern footprint was previously occupied by a print shop; before that, the Lewisburg post office “livery stables” -- the impetus for the restaurant’s name.

As the old building was dismantled, pieces were rescued and reused in the new construction. The mantel is an original beam from the old stables. Walls were hand-painted. The bar top – carved from a single tree. Every detail was meticulously considered, right down to the steak knives.

As for the menu, Nancy sources fresh, regional ingredients. Oysters and other seafood from Virginia, produce and meats from farms in the Greenbrier Valley.

We asked Chef Hilton what diners can expect. “It’s our own version of American Fusion.” Whether in the kitchen or behind the bar, the team prides itself on having fun and making up new recipes as they go.

That’s how the Sauteed Brussels Sprouts came about. Chef concedes he’s not a huge fan of the cabbage-like buds, but on the upside, they can be grown through late winter. He grins, “You can’t go wrong with bacon and butter.” Throw in his highly adept culinary skills, and the most hated veggie in America (it’s true) just might be your new 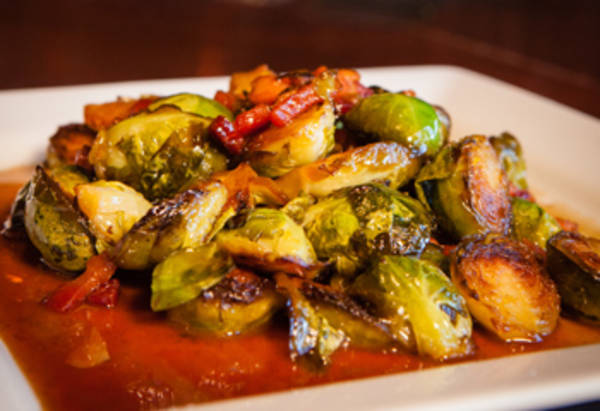 1. Add the bacon to a cold 12” sauté pan and cook over medium high heat until the bacon is crispy.

2. Remove the bacon but leave the fat.

4. Place the brussels sprouts in the pan, flat side down, until the entire pan is tightly filled.

5. Cook over high heat until the flat sides of the brussels sprouts are golden brown.

6. Deglaze with the white wine. Add sugar, salt and pepper and reduce until 90% of the liquid is gone.

NOTE: Brussels sprouts can handle a lot of flavor; don’t be stingy with the salt and pepper.

8. Dice bacon and add to the pan with sprouts.

9. Add the sherry vinegar and toss.