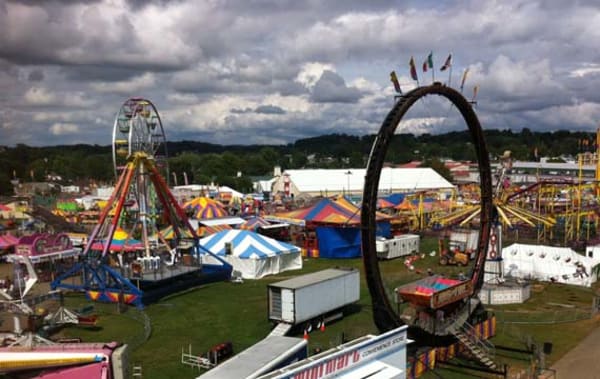 AUG 11 - AUG 20, 2022.  It was only 78 years after the Declaration of Independence was signed that the first recorded fair was held in Greenbrier Valley, VA. It was 1854. Of course, in 1863 it became the Greenbrier Valley West Virginia Fair and in 1941, the WV State Legislature passed an act officially changing the name of the popular Greenbrier Valley Fair to The State Fair of WV.

Ticket information to the State Fair

THINGS TO DO. From the sweet smell of fresh hay to the lights of the midway to the sounds of concert-goers in the grandstand, the Fair is met with anticipation year after year. Throughout the 10-day festivities, there are all kinds of things to do, from livestock shows and horse races to carnival rides and musical acts.

FOOD & MORE FOOD.  Come hungry and ready to satisfy your every culinary craving -- from Belt’s Pizza and a Pronto Pup (the best corndog east of the Mississippi) to Ben Ellen Donuts, giant cinnamon rolls and homemade, hand-dipped ice cream. There’s even the State Fair’s version of farm-to-table with a Cattleman Steak Sandwich, a fresh roasted ear of corn and various offerings at the local high school’s FFA (Future Farmers of America) Ham Stand. 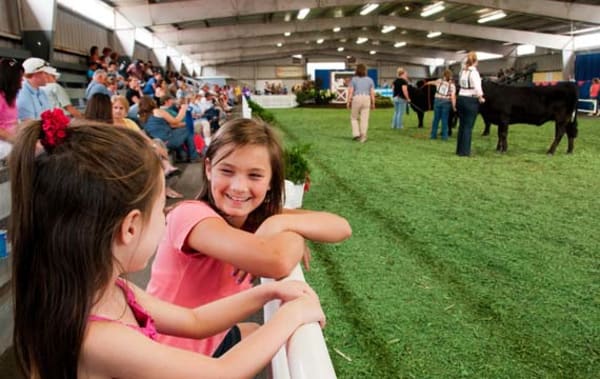 The FFA Ham Stand was organized by local agriculture teachers/FFA advisors in the late 1950’s. It was operated by the State FFA Association with different chapters from around the state working the stand for one day each during the fair. In 1969, the Greenbrier East High School chapter took ownership and has been operating it ever since. Originally, all the food was raised and cured by the students, but as popularity grew, the amount of meat needed became more than they could produce. This year, the sausage for the biscuits and gravy is sourced locally from livestock raised by the students.

EXHIBITS. The custom of entering livestock, home arts and agricultural produce for judging is what the State Fair is built on. There is an eclectic array of competing exhibits from one end of the grounds to the other. Intricate handmade quilts and afghans, needlepoint, art and photography, garden vegetables and delicious baked goods. Why not break out a family treasured recipe or hobby craft and enter it for your chance at winning the coveted WV State Fair blue ribbon?

MIDWAY. Founded in 1896, Reithoffer is a traveling midway show that began with just one wooden, steam-driven merry-go-round. Since then, Reithoffer has been making its way across the country and back bringing the midway carnival rides, lights and games to fairs and festivals. The State Fair of WV has used Reithoffer since 1990 with the midway punctuated by the bright lights of the iconic giant “Dutch Wheel.” Reithoffer brings a variety of amusement rides from adult thrill-rides like the “Himalaya” and the “Freak Out” to Kiddie Land where the “Bear Affair” and the “Wild Mouse” are always favorites. 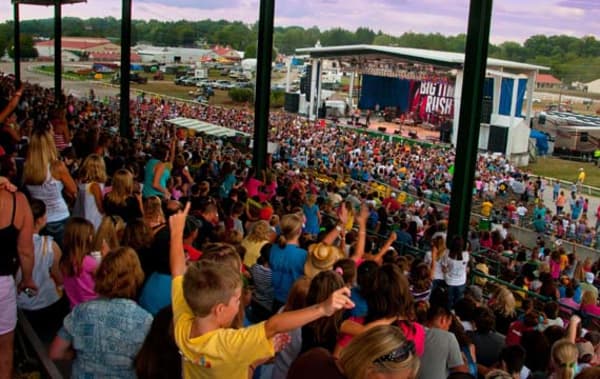 CONCERTS.  Each night the State Fair grandstand hosts a big-name musical act or an event like Foreigner and Walker Hayes. The grandstand seats approximately 6,000 so watch for line-up announcements and ticket sales!

FIREWORKS.  On two of the most popular nights of the fair, Saturday, August 13 and 20 at 10:30 pm, you can catch the Zambelli Fireworks spectacular show. Zambelli Fireworks is based out of New Castle, Pennsylvania and has been lighting up the skies since 1893 with some of the most creative and innovative pyrotechnics in the world. For years, the fair held smaller fireworks displays each night of the 10-day event. In recent decades, it switched to a much bigger, better and brighter show, highlighting a few special nights with a bang!

“ It’s an end of the summer celebration that is anticipated year-after-year by families who cherish the tradition of “a trip to the fair.” ”

From the minute the gates open on the first day until the last visitor leaves on the tenth night, the West Virginia State Fair offers fun, excitement, entertainment, education, exhibits and so much more. It may change, adapt and reflect the community around it, but its foundation -- the institution of the rural farming family -- remains the same.

Note: The app is from Etix and features the "Mountain Grown Fun" logo.