Turn up LaFayette Street from downtown Lewisburg, and the 1897 house with fashionable blue doors and life-size, fiberglass goat will likely catch your eye. It’s The French Goat, a Parisian-style, neo-bistro restaurant recently established by Arthur Forgette and Deborah Porter. 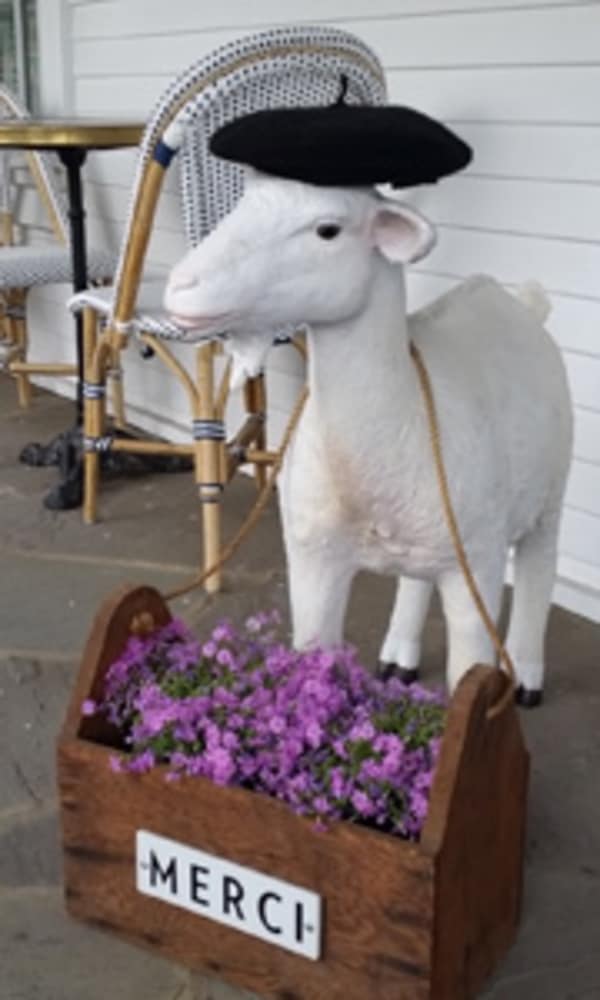 Turn up LaFayette Street from downtown Lewisburg, and the 1897 house with fashionable blue doors and life-size, fiberglass goat will likely catch your eye. It’s The French Goat, a Parisian-style, neo-bistro restaurant recently established by Arthur Forgette and Deborah Porter.

Living in D.C., the pair was looking to leave the corporate world they had known for several decades. For Arthur, most recently an regional VP of 8 Gordon Beerch restaurants, and Deborah, in marketing and public relations, the prospect of a slower pace and doing something on their own was becoming more appealing with each passing day.

Deborah had family roots in the Greenbrier Valley. Summer vacations from youth had drawn her back to the area as an adult, sharing it with her own children and later with Arthur.

They both loved the laid-back ease of Lewisburg and took note of its eclectic “foodie” vibe. With food-themed festivals, a variety of locally owned restaurants and cafes, and a viable clientele in the area, they thought their bistro-style menu “with touches of the South” filled the perfect niche.

As luck would have it, the little house on LaFayette had already been remodeled as a restaurant, complete with cozy seating areas – the house’s original rooms -- a working kitchen and outdoor entertainment garden. Although the kitchen needed enlarged and a bar added, the space was perfect. Now they just needed a chef that shared their vision and desire for a lifestyle change.

It wasn’t until Certified Master Chef Fred Raynaud replied to their ad on LinkedIn, that a match was found. He had been working for several years in research and development and longed to reconnect with the dining customer and kitchen.

First on Chef’s docket, the menu. And one of his signature appetizers, French Onion Soup. We were pleased he shared his recipe and tips and tricks for making it just like a “master chef.”

He points out that the key to success is “cooking the onions low and slow until they are soft and a little mushy. Achieving a deep caramelization allows the natural sugars and juices of the onion to release.” He also advises mixing in a variety of onions, even leeks. “The Vidalia, for example, has a lot of natural sugar,” he points out.

As for what pairs with the French Onion Soup, Chef’s personal preference is “a good beefy comfort meal and a seasoned IPA.”  Bon appetit! 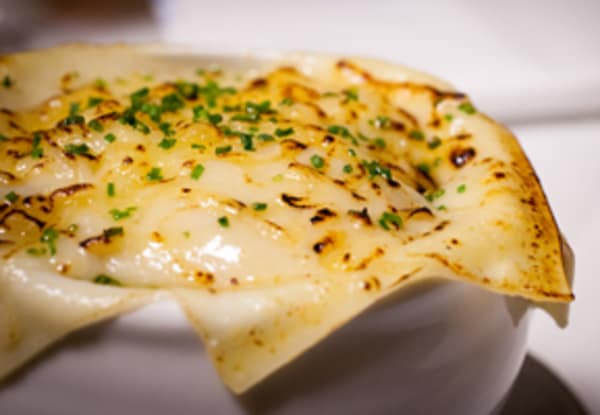 1. Julienne the onions and set aside.
2. On low heat, melt the butter in cooking pot of choice and add onions. (Dutch oven or crock pot)
3. Sweat the onions for 15 minutes at low temperature.
4. Stir in sugar and thyme.
5. Cook onions until they are very soft and caramelized, about 1 hour. (2 hours for crock pot).
6. Add port and turn up the heat, simmering for 15 minutes.
7. Add chicken and beef stocks, and simmer for another 45 minutes.
8. Season to taste with salt and pepper.
9. Add sherry.
10. To serve, preheat oven on broil.
11. Portion soup into soup crocks.
12. Add crostini and cover each crock with 2 slices of gruyere and ½ ounce of shredded gruyere.
13. Use a torch, or place crocks on a sheet tray and broil until cheese is melted and golden.